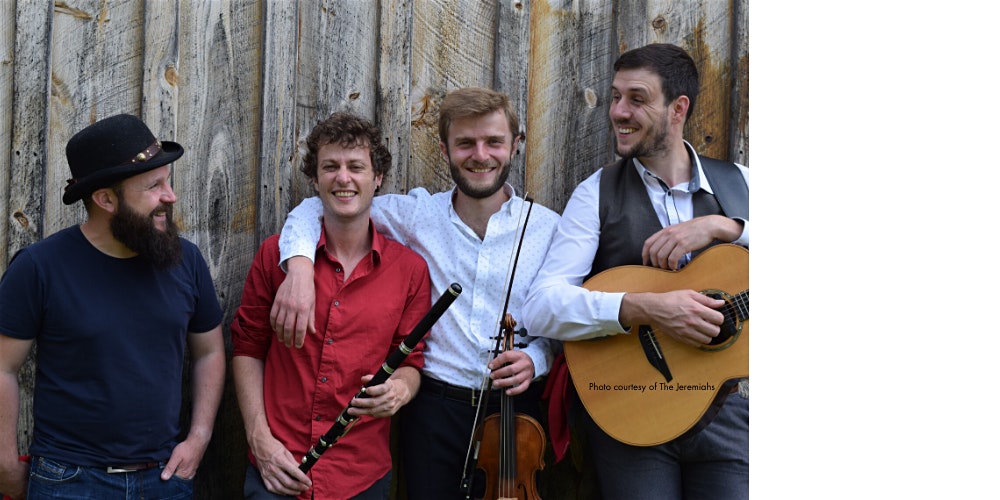 The Jeremiahs combine traditional and contemporary sounds to create their own brand of Urban Folk music. Since founding in 2013 the quartet have trailblazed across Ireland, Europe, and the United States, playing some of the top venues and festivals.

Following the release of their 2017 album The Femme Fatale of Maine the group cemented themselves as a top group in the Dublin music scene. They racked up awards, including Album and Male Vocalist of the Year 2018 Live Ireland, as their sound became more refined. They were no strangers to success, as their 2014 self titled album won awards, including Male Vocalist of the Year 2015 Chicago Irish American News and 2015 Best Vocal & Instrumental Album Live Ireland.

“Superb musicians who engage with their audience to produce a memorable show, definitely not to be missed. Irish Music at its very best.” – Charles Devlin, Director Ireby Festival

“This is the most creative and important group we have heard in Irish music in years, they are special” – Chicago Irish American News

Join the Jeremiahs on March 6th for a special St. Patrick’s Day concert.

Are there ID or minimum age requirements to enter the event?All ages are welcome, but we do serve alcohol and require that anyone purchasing alcoholic drinks carry a valid form of legal identification (driver’s license, state issued ID card, etc.).

What can I bring into the event?We ask that patrons do not bring food or beverages to this event.

Do I have to bring my printed ticket to the event?We accept tickets in the following forms: printed, digital, or confirmation emails. Please make sure to have one of the prior mentioned for ease of entrance.

Is it OK if the name on my ticket or registration doesn’t match the person who attends?This is acceptable as long as the individual attending has a printed ticket, digital ticket, or confirmation email for proof of purchase.

This trip would not be possible without the financial support of Culture Ireland who help with flight and visa costs.