We’ve heard it a million times: Cleveland Rocks! But here at the Conservancy, when we think about how much Cleveland – and Akron – rocks, we think of it a little more literally. We are extremely fortunate to have a plethora of rock formations and different geological wonders right here in northeast Ohio. In fact, whenever we ask people what their favorite spot in CVNP is, we often hear “the Ledges” – a trail that is exceptionally gorgeous thanks to the geological features present there! So for Cuyahoga Connections Volume 3, we’re celebrating rocks and hope you will, too!

Make sure you complete our online scavenger hunt for the chance to win a prize!

Old Rock (is not boring)

Old Rock has been sitting in the same spot in the pine forest for as long as anyone can remember. Old Rock’s life must be boring, right? Oh, how it isn’t! Old Rock (is not boring) combines earth science with a tale of adventure- from getting shot from a volcano, traveling within a frozen glacier, and meeting friends along the way! Through its colorful illustrations and clever storytelling, Old Rock (is not boring) teaches that everything and everyone has their own story to tell.

Old Rock (is not boring) is available online and at Trail Mix Peninsula.

Under Ohio: The Story of Ohio’s Rocks and Fossils

Under Ohio: The Story of Ohio’s Rocks and Fossils by geologist Charles Ferguson Barker gives children an inside look at the climate, soil, and landscape of Ohio. The colorful illustrations take readers a billion years back and walks through a timeline of the creation of fault lines, colliding continents, and evidence that tropical seas once covered the state. This interactive book is an excellent source of information for anyone interested in rocks and fossils and makes the perfect gift for the junior geologist in your life!

Under Ohio: The Story of Ohio’s Rocks and Fossils is available online and at Trail Mix Peninsula.

Become a jr. geologist by not only learning about the different types of rocks and how to identify them, but also about how they’re created. This journal includes prompts to create your own fossil, explore ecosystems and write a story about your very own geological discovery.

The Conservancy is launching a “Virtual Rock Collection” and we need your help!  Here’s the scoop:

We can’t wait to see all the amazing rocks you find! While out searching, please be sure to Leave No Trace by leaving the rocks the way you found them. While it can be tempting to stack rocks, paint them, or throw them in the creek, it is important that we all do our part to protect and preserve nature for future generations. For more information about how you can leave no trace, visit the National Park Service 7 Principles Page.

Calling all parents and teachers – help your kids navigate their way through this virtual scavenger hunt and you could win an awesome prize! The answers can all be found in the Cuyahoga Connections Volume 3 journal above. We will select two winners: one classroom and one family!

Social media is flooded with images of beautiful rock towers, carefully arranged with scenic backdrops.  Also popular are pages dedicated to the treasure hunt style game of hiding painting rocks.  Social media popularized these geological phenomena among park goers, but the reception has been mixed.  Many parks discourage these activities, and public statements by parks are met with debates in the comments about the environmental impact and what constitutes acceptable recreation activities.  Participants are having fun, enjoying nature, and are not ill intentioned.  At the core of these debates are the Leave No Trace principles, a set of wilderness ethics that ensure visitors enjoy nature in a sustainable, preservation focused approach.

What are Rock Cairns?

Have you ever stumbled upon an artistic stack of rocks while out on a hike, and wondered why it was there and what it meant?  Rock cairns, sometimes known as rock stacks, are man-made stacks of rocks, often stacked in an artistic way.  Rock cairns have a long history of marking important sites and marking routes in wilderness areas to guide hikers on the correct path.  Cairns have prehistoric origins, as some of their first documented uses included marking Neolithic burial grounds and marking religious shrines.  In America in the late 1800’s, a standard cairn style was popularized and used to guide hikers on ill-marked trails. In today’s age of maps, signage, marked trails, and internet accessibility, rock cairns and physical markers are much less likely to be used to safely guide hikers.

Despite there being few practical uses for rock cairns anymore, some parks officially maintain them to guide visitors and give a nod to their history.  In the 1990’s, Acadia National Park began recovering this piece of history by utilizing park staff and volunteers to maintain cairns on many eastern trails in the park, while also deconstructing unauthorized stacks.  One the other hand, parks like Capitol Reef National Park in Utah do not maintain cairns, and specifically warn visitors against relying on these stacks to guide their hikes.  Cairns are often just decorations left by visitors, but unfortunately can lead hikers astray who think they are trail markers.

Most parks classify rock stacking as environmental graffiti and acknowledge the adverse effects to the environment that results from moving rocks.  Many visitors retreat to nature to walk through preserved natural spaces, seeking peace and solitude.  When visitors move rocks to create decorative cairns they are altering nature for the next visitor and leaving a reminder that they were there, potentially lessoning the experience.  Decorative cairns can take away from the natural beauty of an area, and disregard leave no trace principles.  Leave no trace principles are not just about packing out trash, but about aiming for zero impact, and not leaving any signs you’ve traveled through an area.

In addition to reducing visitor experience, picking up rocks can damage the environment, including fragile vegetation and micro ecosystems.  Moving rocks disturbs soil and makes areas more prone to erosion, particularly along streams and rivers.  These issues are of particular importance in CVNP, as improving the quality of the Cuyahoga River is a top management priority, and steps to decrease riverbank erosion and sustain life in the river should be taken.  Preventing erosion protects water quality, which in turn provides a safe habitat for many lesser-known wildlife in CVNP, like salamanders.

Generally, rock cairns should only be made by park rangers, trail maintenance volunteers, or others authorized to do so.  Each National Park has different standards to maintaining trails and cairns, but all have the same rule: If you come across a cairn, do not disturb it.  Don’t knock it down, but don’t add to it.

Do not tamper with cairns – If an intentional cairn is tampered with or an unauthorized one is built, then future visitors may become disoriented or even lost.

Do not add to existing cairns – Authorized cairns are carefully designed.  Adding to the pile can cause them to collapse.

Social media is often sighted for the increase in rock stacking, as users build intricate piles in scenic locations to capture artistic photos.  Various accounts and hashtags dedicated to the practice allow users to share and view photos of cairns all around the world and has widely popularized the activity.  In recent years social media has perpetuated another geological phenomenon – hiding painted rocks.  The fad began in 2015 and exploded on social media, wherein visitors would paint rocks, often accompanied with a positive message on the back, and place them in semi-hidden outdoor locations to be found by others.  Though the original project leader encouraged using non-toxic paint and asking permission to leave rocks on premises, the movement spread like wildfire and the original guidelines never reach many participants.  As with rock stacking, hiding painted rocks goes against leave no trace principles, and the well intentioned positive-message movement brings its own host of environmental concerns. Toxic paint can be licked off by animals, or leech into surrounding soil and water.  Traveling to and from a hidden rock can lead to erosion and the trampling of fragile resources.  Many participants follow clues to search for hidden rocks, and although CVNP allows visitors to explore off trail, many parks report damage to restoration areas, damaged resources, and the creation of unauthorized social trails.

What We Can Do

If volunteers in Cuyahoga Valley National Park do not monitor or maintain cairns or painted rocks, and the National Park Service advises visitors to not tamper with cairns they encounter, then what role can volunteers and visitors play in this situation?  Not all volunteer work requires physical outdoor labor – and CVNP boasts dozens of positions to prove that!  Becoming more informed and educating the public is a valuable service all park visitors can partake in.

Visitors do not build cairns or leave painted rocks to be intentionally malicious.  They are enjoying public lands in their own way and may not realize their actions could be detrimental to the environment.  If you see someone stacking rocks or hiding painted rocks in CVNP, it’s acceptable to politely approach them and inform them the park discourages these activities.  You can also encourage them to learn more about Leave No Trace guidelines and other wilderness ethics.

As conversations swirl around questions of what parks should and should not be, and while there are disagreements between where the line between recreation and preservation should be drawn, all visitors care deeply about national parks.  We can all become more informed, practice leave no trace principles, and enjoy our great public lands. 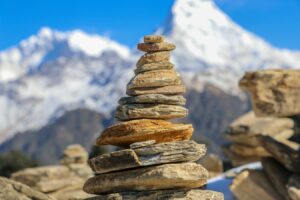 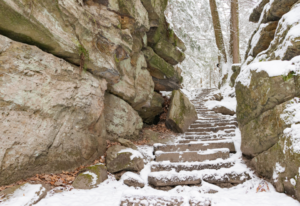 Get Conservancy news and updates delivered right to your inbox – sign up for our biweekly e-newsletter today!