After breaking ground earlier this year, the Boston Mill Visitor Center project is steadily moving forward. So what’s going on now? We put together the following update of what has been happening over the last couple of months to keep you in the loop. 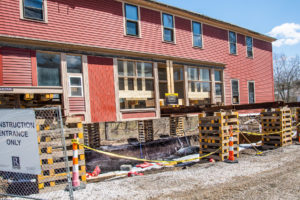 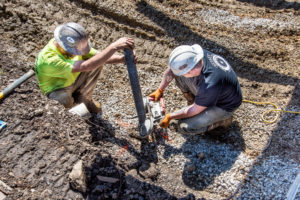 Since the project broke ground in early January, construction is progressing and the project is on track to be completed in the fall of 2019. After securing the site in February for visitor safety, selective demolition of the existing mechanical, electrical, and plumbing systems in the three buildings was undertaken.

In April, the building was lifted several feet off its original foundation so that a new foundation can be built. The foundation replacement is one of the more costly, but necessary aspects of the project. We want the building around for the next century! 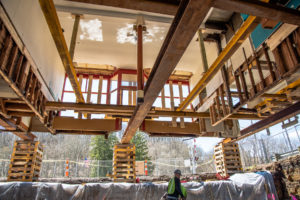 If you have been by the Visitor Center construction site recently you may have wondered about the lack of activity at the site, especially after a couple of months of seeing busy construction and dramatic changes. After the building was up on piers, the contractor unexpectedly found the bedrock closer to the surface than what had been anticipated from the geotechnical testing information. This meant our engineers and architects had to go back to the drawing board to devise a new approach to supporting the building. It’s not a particularly vexing or expensive problem, but just took some time to resolve. Although the delay had stopped work for several weeks, it did not impact the overall project schedule significantly, as there were several months of cushion built into the timeline. Throughout the construction process, the park ensures that no significant archaeological resources are being impacted.

CVNP is now in the final stage of design for the west side parking lot and new CVSR train station. Trees have been taken down in the location of the new parking area along Riverview Rd. and will be removed from the site when construction on this side of the railroad begins.

The design, production, and fabrication team for the next phase of the exhibit work is under contract and work has begun. The team includes two contractors, Color Ad and Design Minds. Both firms have extensive National Park Service and visitor center experience and will both be hard at work on our project for the next nine months or so. Soon we should have some images to represent what will go inside our new visitor center!

Thanks to the amazing support of the more than 500 foundations, corporations, and individuals who have helped us raise $6.85 million!

In close partnership with the National Park Service, the Conservancy is managing the fundraising, planning, design, and construction of the project. The Conservancy has a philanthropic mission to strengthen and provide support for the park. The Boston Mill Visitor Center will enhance all visitors’ experiences in Cuyahoga Valley National Park.