Here’s something that will impress your friends: In Cuyahoga Valley National Park, you can see rocks that are older than the dinosaurs.

Around 400 million years ago, CVNP was covered by an ancient saltwater sea, full of enormous fish and sharks. In the millions of years since, the forces of nature have shaped the landscape into the green valley you know today. In some places, though, there are lingering reminders of older times. You can see some of this history in rock formations created by years of rushing water and scouring weather. 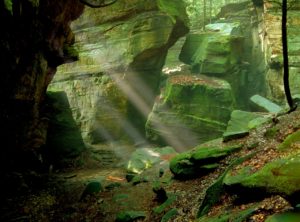 It’s almost hard to imagine your favorite places in CVNP covered in water! Over time, pieces of shell, mud, and sand settled to the sea floor, where enormous pressure compressed those particles into bedrock.

This continued for many millions of years, until an ancient river began to carve out the original Cuyahoga Valley. This ancient river washed away the more recent rock formations—from 150 to 50 million years ago or so—until it was stopped in its tracks with the advent of the Ice Age.

The Ice Age began around two million years ago and ended just 10,000 years ago. During that time, enormous glaciers bulldozed northeast Ohio at least four times, burying the old landscape and filling in the original Cuyahoga Valley. As they moved into Ohio from the north, the glaciers completely buried the Cuyahoga Valley with silt, sand, and clay.

At the end of the last Ice Age, the Cuyahoga River appeared as a way for all that melting water to make its way out of Lake Erie. And for the past 4,000 years, the river has spent its time washing out glacial sediment, re-carving the original Cuyahoga Valley, and cutting through bedrock to expose ancient history. Throughout the valley, you can see also enormous granite boulders that were left behind in odd places as the glaciers melted. Even the town of Peninsula was once a glacial lake about 50,000 years ago! Along with the streams and creeks that empty into it, the Cuyahoga River created the Cuyahoga Valley as we know it today.

These days, you can see many different types of sedimentary rocks in the park. Sedimentary rocks form when small particles are deposited in a body of water—in our case, the ancient sea that once stood over this area. Here are a few of the types of rocks you can find in CVNP: 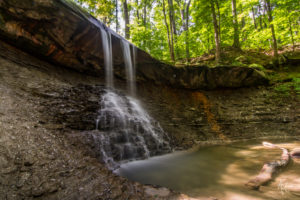 Shale is a dark gray rock formed by the deposition of mud and other sediment and compressed over time. You can see the fossils of ancient shelled creatures called brachiopods and other invertebrates in CVNP’s shale.

Shale is the oldest type of sedimentary bedrock in the park. It’s formed from silt and clay and creates thin layers of rock that split apart easily. Geologists have divided CVNP’s shale into three major areas, based on natural stream divisions: Chagrin Shale, Cleveland Shale, and Bedford Shale. 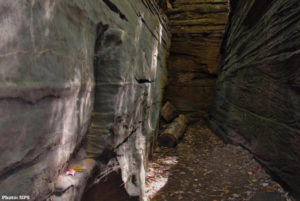 Sandstone, like shale, is formed by the compression of sediment over time, but it’s formed primarily from grains of sand. These sand deposits formed in ancient river deltas and were eventually cemented together into sandstone. Sometimes, you can see the ripples from ancient streambeds in these rocks. 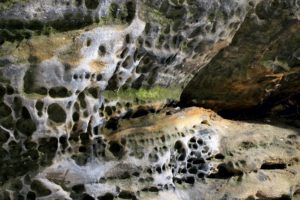 One of the showiest types of rock in the park, conglomerate, is made up of cemented pebbles and sand, and it can appear in bright yellow and orange colors. In some places, you can see holes in the rock that look like honeycomb. This honeycombing occurs when pebbles become unglued and wash out from the rest of the rock.

Here are our favorite places to see the ancient geology of the Cuyahoga Valley:

We think it goes without saying… rocks rock! Take a hike through your national park and check out some of these rock formations for yourself, or follow a park ranger on a ranger-lead hike to the Ledges to learn more geological history. Make sure to tag any photos you post online using #forCVNP!