My 11-year-old son has never met a boulder or pile of rocks that didn’t invite him to climb. He’s drawn to creeks and streams in the same magnetic way; combine those two loves, and he’s occupied for hours.

Such was our inaugural journey to the Everett Covered Bridge (2370 Everett Road in Peninsula, 1/2 mile west of Riverview Road) one sunny, 70-degree day last summer. In Cleveland, weekends like these are our reward for making it through the winter, and my family of four took full advantage of the paths, streams, and peace that Everett Covered Bridge offers. While I wanted to check out the iconic red structure—the only remaining covered bridge in Summit County—my kids had other ideas. They were near the water the minute they saw a path. 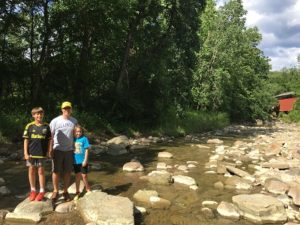 I knew they weren’t alone in their attraction to life under and around bridge. The story of the Everett Covered Bridge is one that’s steeped in the history of the area and the communities that it brought together when it was originally built in the 1870s. Today, the bridge still brings communities and people together, whether for a horse ride, volunteer opportunity, annual dance—or simply a family outing.

A Gathering of People

We were not alone in exploring the bridge that day. Upstream a family was skipping rocks, which led to a rock skipping lesson for my 8-year-old. (A consummate dad and daughter bonding moment.) Downstream, a father tried to lead his tweens across the water unsuccessfully. This led to my son deciding he could master the crossing (also unsuccessfully). It’s all a day-in-the-life of the bridge.

“It’s a lovely place to step back in time or step away from the 20th century,” noted Rebecca Jones-Macko, a National Park Service (NPS) Ranger who is considered an authority on the history of the area. “These covered bridges once dotted the landscape and were common structures. Now that’s not the case, and people drive distances to experience the nostalgia.” Indeed, when it was built in the 19th century, it was one of thousands of covered bridges dotting the landscape. Today, it stands alone as the last covered bridge in Summit County. 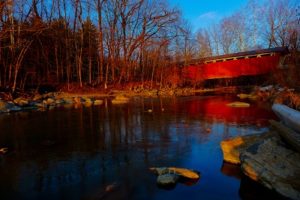 The bridge’s history is a little bit folklore, a little bit indicative of the time period when it was built. As the story goes, on a winter night in 1877, valley farmers John Gilson and his wife had to circumvent a large ice chunk in the road near Furnace Run stream when returning home from visiting friends. A winter storm had caused the waters to rise, with ice obstructing the path. In passing around the ice, they came too close to the rushing stream, and their entire sleigh was thrown into the water. Although Mrs. Gilson was rescued, Mr. Gilson was pulled downstream and his body not recovered until four days later. The bridge may have been built in response to this tragedy; in truth, the date of construction is unknown.

While the story may not be 100 percent historically accurate, it does paint a picture of the treacherous creek crossings that were common during that time and the importance of covered bridges during the era. Like most bridges built in the 1800s, locals used timber trusses and decking for construction, since wood was easy and inexpensive to get. To protect the truss work from the weather and (hopefully) extend the life of the structure, bridges were built with siding and a roof, creating the iconic covered look. 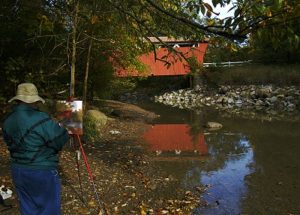 The bridge as it stands today is a re-creation of the original structure that washed away in a spring flood in 1975. Local citizens, rallied by a park friends group (then called Cuyahoga Valley Association; now called the Conservancy for Cuyahoga Valley National Park), began raising funds to rebuild the bridge. School children, private organizations, and governmental agencies all joined hands to secure funds for the historically accurate reconstruction, completed by the NPS in 1986.

One of the stories of the Cuyahoga Valley is “the story of connecting people and communities that were previously isolated,” said Jones-Macko. “We preserve that in our park. The waterways and bridge played a major role in writing that story.”

That bridge is still bringing people together today. Several hiking and bridle trails converge at the crossing. And, every year in June, the NPS hosts an old-fashioned dance with live music, inviting the community to share food and friendship.

“There are engagements on the bridge; family portraits are taken there. It’s a place for people to meet and come together,” explained Jones-Macko. 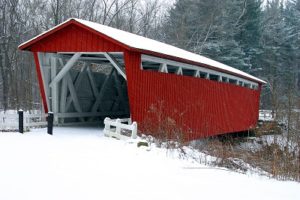 In the spring, the nearby scenic overlook is flush with wildflowers, including phlox and bluebells; in the summer, the nearby farm is lush and green; and in the fall, the red siding enhances the natural colors of the landscape for a brilliant show. In winter, a burst of red against the snow is a welcome sight. In fact, in 2006 the National Park Foundation, an organization that supports the NPS, included Everett Covered Bridge on its list of top ten places for photography on public lands.

My photography skills are more novice than noteworthy, yet I still found myself pulling out my cellphone to snap the kids with the red siding as a backdrop. From our rock skipping to boulder hopping, it added an element that took me back to a time and place.

As we prepared to leave later in the day, my daughter wanted a few more minutes of rock skipping time to perfect her new skill. My son decided he also needed to try his hand at it. Hilarity ensued as the rocks he picked—one bigger and rounder than the next—created more of a splash than a skip. His sister, now the expert, jumped in to lend a hand. Believe me, sibling collaboration like this doesn’t happen all that often.

One… two… three skips later, they both felt the pride in helping each other achieve success. That is, until their discussion reverted back to trying to outdo each other, as siblings do.

It’s moments like these that remind me why we love to visit Cuyahoga Valley National Park. It’s a part of our history, connecting people and places—even today. It’s a place for us to make memories that will stay with us long after we leave.

The Conservancy for CVNP helps connect people to their national park with behind-the-scenes stories like this one from Conservancy member Julie Schuler. Support CVNP storytelling by making a special donation to the Conservancy today >