This installment of Cuyahoga Connections commemorates Black History Month and encourages us to learn about the many individuals who worked for positive change in the United States.

Lift Your Light a Little Higher takes you on a journey with Stephen Bishop into the depths of Mammoth Cave. Bishop is a guide, an explorer and an enslaved person. Sold with the land, Bishop was known for his eloquence, intelligence and deep knowledge of the cave. First to discover eyeless fish, cross the chasm known as the “Bottomless Pit” and map miles of the cave, Bishop’s work remains the foundation for much of what we know about the cave.

“Stephen was a self-educated man. He had a fine genius, a great fund of wit and humor, some little knowledge of Latin and Greek, and much knowledge of geology, but his great talent was a knowledge of man.” Franklin Gorin, enslaver of Stephen Bishop at the time of Bishop’s death.

Created by the slow dissolution of limestone by groundwater, Mammoth Cave has been attracting tourists since around 1816. Authorized as a national park in 1926 and fully established in 1941, over 365 miles of the cave has been surveyed. Scientists believe that there may be more than 600 miles yet to discover. If you visit the park today you can enjoy a cave tour along with hiking, biking and kayaking.

Written by the flame of a candle, Stephen Bishop left his name on the ceiling of the cave. What would you leave behind to let the world know you were here?

Lift Your Light a Little Higher: The Story of Stephen Bishop: Slave-Explorer

Have you heard of the Buffalo Soldiers? Who were they, and how did they change the course of history? As you make your way through journal 6, you’ll learn about the nation’s first park rangers – and the tough lives they led. What was life like for a Buffalo Soldier, and how can we learn from history to create a better future? 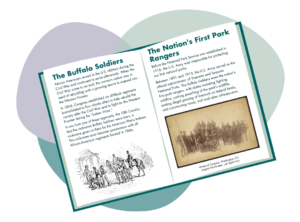 “Mary McLeod Bethune achieved her greatest recognition at the Washington, DC townhouse that is now this National Historic Site. The Council House was the first headquarters of the National Council of Negro Women (NCNW) and was Bethune’s last home in Washington, DC. From here, Bethune and the NCNW spearheaded strategies and developed programs that advanced the interests of African American women.”

Throughout her lifetime Bethune was an educator, civil rights champion, a leader of women & presidential advisor.

“In the spring of 1961, a small interracial band of “Freedom Riders” set out to challenge discriminatory state laws and local customs that required a separation of the races on buses and in bus station facilities, like waiting areas, lunch counters, and restrooms….Although only thirteen Freedom Riders started the journey, they inspired hundreds of others to join their cause.”

African Burial Ground is the oldest and largest known excavated burial ground in North America for both free and enslaved Africans. It protects the historic role slavery played in building New York.

After you’ve done some learning and exploring, share something you learned with us at connect@forcvnp.org.

From some of the first guardians in the Buffalo Soldiers, to the front lines of protection and regulation in Cleveland’s own Mayor Carl Stokes, to the marginalized groups left out of recreation and land management policy, Black and Indigenous people have a long and complicated relationship to public lands.

Read below to learn more as we highlight select events throughout history and reflect how these have impacted CVNP, the Conservancy’s mission, and how volunteers help create a more equitable and accessible park.

After the Civil War, the U.S. Army established several all-Black regiments known as “Buffalo Soldiers” to help rebuild the country. In addition to their military duties, the Buffalo Soldiers served as caretakers of some of America’s oldest parks, including Yosemite and Sequoia. They became some of the first national park rangers before the title even existed, as the National Park Service wouldn’t be established until 1916.  They fought wildfires, curbed poaching, prevented illegal grazing and constructed roads, trails, and other infrastructure.

Most famous perhaps was Captain Charles Young, who in 1903 led a company of Buffalo Soldiers in Sequoia and General Grant (now Sequoia and Kings Canyon) National Parks.  He was appointed acting superintendent, becoming the first black superintendent of a national park.  Young directed many projects, including repairing and constructing roads in underdeveloped areas of the park.  Young’s work had a quick impact on recreation opportunities and visitor experience, as his men completed a road to the Giant Forest and to the base of Moro Rock, allowing visitors to enter the mountaintop forest for the first time.  Young was only the third African American to graduate from the United States Military Academy, and at the time of his death was the highest ranking African American in the U.S. military.

On June 22, 1969, the Cuyahoga River caught fire a few miles north of what is now Cuyahoga Valley National Park.  It wasn’t the first time the river burned, the heavily polluted Cuyahoga had ignited over a dozen times in the last century.  What was different about this fire was how Cleveland Mayor Carl Stokes seized the opportunity to highlight environmental failures, leading press on a pollution tour of the river the following day.  The publicity surrounding this event became a catalyst for the environmental movement and the Clean Water Act.

Carl Stokes was already in the spotlight as two years earlier he became the first African American elected mayor of a major U.S. city.  He used his notoriety and media savvy to draw attention to the environmental issues of the Cleveland area, and discuss how urban areas were disproportionately impacted by environmental failures.  Due to the polluting industries that lined the river, the damage compounded as the river flowed north, often impacting low-income communities the most.  During the pollution tour Stokes argued Cleveland couldn’t control pollution within its own borders, as they had no power over the actions of the suburbs, the polluting industries upstream, or state regulations.  He argued for more regulation and oversight, and coverage from environmental reporters like Berry Klaric bought the issue to the national stage.

Though the tide was already slowly turning on environmental reform, there’s no doubt Carl Stokes played an important role in the history of the environmental movement.  Coverage of Stokes helped lead to the first Earth Day, the establishment of the Environmental Protection Agency, and numerous pieces of legislation including the Clean Water Act.

Despite these positive changes, Stokes thought he fell short of achieving all the changes necessary.  The environmental movement at the time focused on air and water pollution but didn’t encompass other issues of the urban environment that were important to Stokes.  Stokes did not see himself as fitting the narrow definition of an environmentalist, his concerns were closer to what we now call environmental justice.  In the coming years the environmental justice movement helped broaden environmentalism, and focused on how poor environmental conditions affect low-income and minority communities more than others.  Stokes’ legacy isn’t just about the 1969 fire, or the numerous policy impacts it affected through the country; it’s about thinking how we address issues in a way that benefit everyone, particularly marginalized communities.

Activists face the same challenges today that Carl Stokes tried to address in Cleveland fifty years ago – environmental conditions affect minority and marginalized groups at a higher rate, and with more severe consequences.  The water protectors on the Fond du Lac Reservation in Minnesota are fighting the construction of a pipeline that if completed, would stretch over 337 miles through Minnesota alone, and cross more than 200 bodies of water, including the Mississippi River twice and through Lake Superior and Mississippi watersheds.

Indigenous-led resistance sprang up immediately, as Native nations argue the pipeline violates their treaty-protected rights.  Construction is destroying ecosystems on which Native communities rely on for hunting, fishing, and gathering wild rice, all rights the federal government guaranteed to tribe members.

According to the state’s own environmental impact statement (EIS), the pipeline would lead to emissions equaling those of 50 new coal-fired power plants, and that the social cost of carbon from the construction would total more than $287 billion in damages in the next 30 years.  Despite the clear harm to local communities, the state’s Public Utilities Commission granted the permit, claiming there’s a lack of scientific consensus on the effects of carbon emissions.

Native communities would be particularly vulnerable to spills as it would contaminate their water, endangering their ability to hunt, farm, and fish off the land they need to survive.  The social and legal battle rages on, and a sad parallel can be drawn from many of the environmental justice battles of the last century – that black and indigenous populations are disproportionately impacted by environmental destruction.