If you were an animal in CVNP, which one would you be? Take our quiz to find out!

What is your preferred place to be in the park?

What is your hobby?

C. Being social with friends

D. Hangin’ around at home

What is the best way to describe your fashion sense?

A. A feather hat

D. All black everything

What is your favorite food?

C. I have a major sweet tooth – anything with sugar!

D. I’m an adventurous eater – I’d eat an insect if you told me to!

What is your favorite adventure quote?

B. “Some people feel the rain. Others just get wet.” – Roger Miller

C. “Just living is not enough. One must have sunshine, freedom and a little flower.” – Hans Christian Anderson

D. “The cave you fear to enter holds the treasure you seek.” – Joseph Campbell

The Cuyahoga Valley, with expansive, secluded wooded wetlands and rebounding fish populations, has become an ideal place for eagles to feed and nest. The great blue heronry in the Pinery Narrows was a natural choice for the eagles’ first nest location. Eagles prefer tall trees and pre-existing nests that they can expand.

A pair of bald eagles has once again returned and is actively tending to its nest within the Pinery Narrows area in Cuyahoga Valley National Park. To protect the eagles from human disturbance, the area surrounding the nest tree will be closed until July 31, 2019. This pair has nested in the national park since 2007 and successfully fledged a total of 15 eaglets.

As exciting as it is to see an eagle, it is even more thrilling to watch its fishing skill. An eagle, with its incredible eyesight, can see a fish surfacing from up to two miles away, soar over the location, and then grab its prey using its extremely strong four-inch talons. The Cuyahoga Valley eagles are known to forage between Canal Exploration Center and Bath Road along the Cuyahoga River. In winter, they are most commonly seen near open water. Bald eagles prefer to eat fish, but will also eat a variety of small mammals, birds, and sometimes carrion.

River otters are native to Ohio and were plentiful centuries ago. By the early 1900s, however, they had completely disappeared from the state, due to habitat destruction and hunting. In 1986, the Ohio Division of Wildlife began re-introducing otters to major rivers around Ohio. The seven-year project transplanted otters from southern states to thrive once more throughout Ohio.

By 2002, their population had rebounded so much that they were removed from the state’s endangered species list. Today, river otters can be found in two-thirds of Ohio’s counties.

In November of 2013, a pair of otters was discovered within CVNP boundaries, and we’ve welcomed them with open arms ever since. Because of their sensitivity to chemicals in the water, their return is a wonderful sign of CVNP’s rebounding environmental health.

River otters are talented swimmers, with long, tapered bodies and short, sleek, dense fur. While designed for the water, they are also agile on land, and build their burrows close to water’s edge near rivers, lakes, marshlands, or similar ecosystems. In the early evening and throughout the night, otters are very active as they hunt for fish and other aquatic animals. In water, they’re so fast that they have few natural predators.

Beaver Marsh is the most reliable place to see otters in CVNP, but they’ve been known to explore other wetland areas of the park as well. We suggest heading out to the Beaver Marsh early in the morning and setting up a quiet camp on the boardwalk. Make sure to bring your binoculars and a camera!

These lightweight fliers are capable of covering more than 80 miles a day, sometimes gliding with winds traveling over 20 miles per hour. This requires using tremendous energy reserves that must be replenished daily. To do this, the butterflies feed on plants high in nectar, such as goldenrod and New England aster.

The monarchs’ peak migration is the third week in September. You can observe them at Terra Vista Natural Study Area and the large meadow of goldenrods, approximately halfway around on the Cross-country Trail in Cuyahoga Valley National Park. The best time to come is in the afternoon on bright sunny days, when temperatures are above 70 degrees.

Bats are some of the most fascinating mammals in our national park. They navigate in the dark using objects to reflect sound—a process called echolocation—and keep our mosquito population in check. These remarkable animals are the only mammals capable of flight. 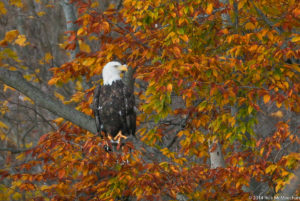 In the words of Congressman John F. Seiberling, CVNP is “a park by, of and for the people.” With your help, we are working to make sure this is true for everyone who finds themselves in CVNP. Exploring more than 120 miles of trails, biking, having a picnic, playing games, practicing yoga, birding, kayaking, catching up with friends, running, fishing, meditating, horseback riding and more are waiting for you in CVNP!