There are a few things in Northeast Ohio you can count on around Valentine’s Day each year: celebrating Super Bowl Sunday (minus the Browns), a giant snowstorm wreaking havoc on our daily commute, and, finally, the arrival of our beloved Great Blue Herons in Cuyahoga Valley National Park.

Yes, February 14 marks the unofficial return of Ohio-native Great Blue Herons to their local nesting hangout. It’s the day we can reliably expect to see some form of activity in the popular Bath Road Heronry, a local roadside sanctuary near Riverview and Akron-Peninsula Roads. It marks the beginning of an annual five-month relationship between Great Blue Herons and hundreds of area birders – many of which have been meeting at the same spot since the mid-1980s. 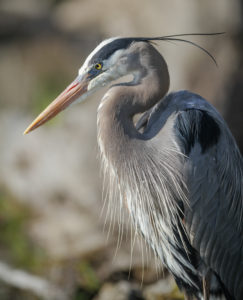 The Great Blue Heron: One of CVNP’s most iconic species (Photo: Rick McMeechan)

So why is NEO so captivated by these big beautifully awkward birds? I posed this and other related questions to local citizen scientists Rob and Peg Bobel, who have been monitoring Great Blue Herons for CVNP for years. Rob worked at the park for more than three decades, while Peg is a former director of the Cuyahoga Valley Association, which is now the Conservancy for CVNP.

Jen: It’s February, so the Bath Road Heronry pull-off is going to start attracting quite a crowd. Why are people in this area such fanatics about the Great Blue Heron?

One, the surprise factor. You just don’t expect to see these great big birds nesting in colonies right on the side of the road. It’s a sight. An unexpected sight.

Two, reliability. People who know about the local Great Blue Herons also know they can look forward to seeing them every year. In fact, many Bath Road Heronry visitors are intergenerational. They came as kids and now are bringing their own children, as their aging parents watch from the car.

Three, the Great Blue Herons are just fun to watch – and the Bath Road Heronry offers such a unique view, as the birds typically nest in more secluded areas. We’ve met visitors from out of state there, others from out of the country. People come on their lunch hours, on bikes from the Towpath, on buses from retirement homes. Especially on Mother’s Day. Now that’s the height of activity – visitors see a little bit of everything. 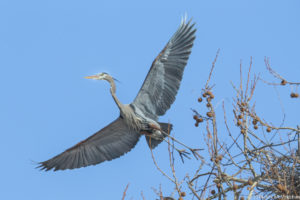 Taking off from the Bath Road Heronry! (Photo: Rick McMeechan)

Jen: If Bath Road is such an odd spot for Great Blue Heron nesting, what makes it so appealing to them?

Peg: Well, like any wildlife, it’s all about habitat and food. The Bath Road Heronry started with five really good trees – strong sycamores that could hold the weight of these giant nests. The trees also overlook a major food source: the Cuyahoga River. Not all five trees are still standing, though, so the Great Blue Herons have had to move elsewhere around Bath Road, as well as CVNP in general.

Jen: So if we aren’t seeing as many Great Blue Herons at Bath Road as in the past, we shouldn’t worry?

Rob: In our opinion, no. The Great Blue Herons aren’t leaving CVNP. Their numbers are steady. They’re just moving to other trees in other nesting areas around the park, like off Akron-Peninsula Road near Wetmore Road and another off Canal Road. Areas that are more difficult for visitors to view – and us to monitor.

Jen: How exactly does CVNP monitor the Great Blue Heron population? And what’s your role, as citizen scientists, in tracking the herons every year?

Peg: Rob and I are two of three park volunteers (the other being Andrea Irland) who observe and record, or “chart out,” Great Blue Heron activity – from mating and nest building to incubation, parental activity, and fledglings. A simple example? Every March, we photograph each tree, label it alphabetically and count the number of visible nests. These scientific investigations help CVNP better understand Great Blue Heron behaviors and the population as a whole. And, ultimately, this data helps drive park decisions. 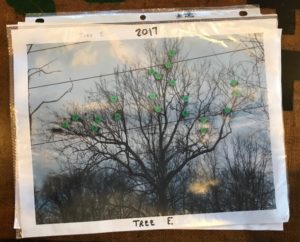 Jen: When did CVNP start monitoring the Great Blue Herons? And why?

Peg: According to our records, it looks like CVNP started monitoring the Great Blue Herons in 1993. That year, the monitors found 42 nests at Bath Road; a decade later there were 176!

Jen: That’s quite a jump – even over 10 years. What could cause such an increase in the area’s Great Blue Heron population?

Rob: While it’s hard to know for sure, our guess is that the dramatic increase had a lot to do with water quality. Back in the late 70s/early 80s, significant progress was being made in updating the area’s wastewater treatment facilities, and CVNP was just being established. With both their help, the Cuyahoga River and surrounding land became cleaner and better protected. Fish started coming back and beavers were welcome to develop wetlands. All this created the ideal habitat for our Great Blue Heron friends.

Jen: What about now? How has the environment changed over the years?

Peg: Of course the environment has changed some – like we mentioned, the Bath Road Heronry lost a couple of primary nesting trees due to natural causes, for the most part. And the Great Blue Herons still encounter natural predators like owls, eagles, and hawks that pick off their fledglings. But, overall, our Great Blue Heron habitats are thriving.

Rob: While we can’t give you an exact count, we expect the current CVNP Great Heron population to be in the high hundreds. You can’t see them all, but they’re there. 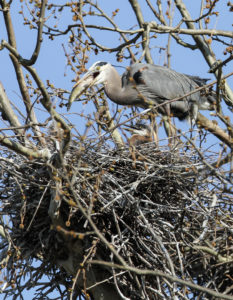 Jen: How can we help make sure this number doesn’t dwindle? That NEO can continue this long love affair with our Great Blue Herons?

Rob: And, of course, continue your support of CVNP and areas like the Bath Road Heronry. NEO is fortunate to have such a great lookout spot.

Jen: So are you willing to predict the exact date of this year’s first Great Blue Heron sighting?

Rob: Already done. We saw a bird at a nest on Bath Road a couple weeks ago! Spring is coming!

Do you want to learn more about the natural and cultural history of Cuyahoga Valley National Park? Check out the Conservancy’s Lyceum Lecture series, a program of the Cuyahoga Valley Institute that lets you learn directly from the experts. Learn more >