It’s officially the first day of summer! The summer solstice is the longest day of the year, which means you have a little more than 15 glorious hours of sunlight to enjoy the beauty of Cuyahoga Valley National Park. Depending on who you are, a full day experience in Cuyahoga Valley National Park can vary. Let’s take a glimpse into what an entire day in CVNP could look like, from sunrise to sunset.

A unique way to start your morning before sunrise is by visiting the Bath Road Heronry to scope out the beautiful, impressive Blue Herons. Nearly 60 feet down from the herons’ nests, it appears as if the trees have hundreds of tiny eyes. 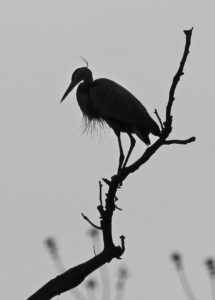 Did you know: The first record of nesting great blue herons in the Cuyahoga Valley occurred in 1985 with the discovery of a nesting pair in the Piney Narrows.

Along with the beautiful sight of blue herons, you’ll also catch a mystifying view of valley fog. Valley fog is a type of radiation fog and can often linger for days.

Did you know: There are several different types of fog, and they have names: radiation fog, advection fog, valley fog, and freezing fog.

At 5:53 a.m., you will start to see the colors of a beautiful sunrise. The sun, being at its farthest point north of the equator, officially marks this day in 2022, June 21st, as the summer solstice.

In the afternoon, you might want to go on a scenic hike. The Virginia Kendall Ledges is a well-loved retreat, a green space that is available to all people for all time. It is a perfect location to cool off because of the unique microclimate, which also provides a habitat for the dominant tree, the eastern hemlock. 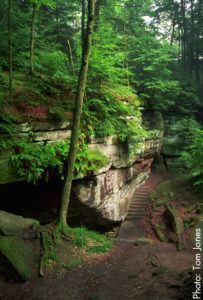 Did you know: Native Americans lived among the rock outcroppings in Virginia Kendall, getting food and water from nearby woods and streams. A favorite place for Indians to store things back then was between the crevices of the rocks, like that of the famed Ice Box Cave, which provided a natural form of refrigeration.

After a moderate excursion on the Ledges trails, you will be rewarded with the Ledges Overlook, a popular destination that gives an unobstructed, glorious view across the valley.

By late afternoon, you’ll probably feel hungry, which would make a great time to visit Trail Mix to recuperate with fresh, local food or dozens of flavors of Mitchell’s ice cream.

You won’t want to miss a sunset in Cuyahoga Valley National Park to conclude your day. There are countless places in the park to witness a stunning sunset with family or friends. The Ledges overlook is a popular viewing spot for sunsets. Consider trying a less-traveled spot, such as Indigo Lake, a place with gradually grassy inclines circling the water, perfect for reclining and watching a sunset. 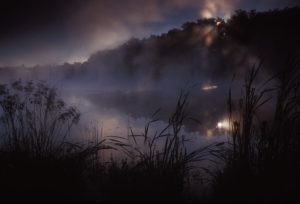 Did you know: Indigo Lake was formerly a sand and gravel quarry, until it came under the responsibilities of the National Park Service on December 27, 1974 with the creation of the Cuyahoga Valley National Recreation Area. The pit was later filled with water by park service personnel to create what was subsequently called “Indigo Lake”, which remains in place sustained by a constant supply of water from several natural springs in the immediate area.

Make the most of the longest day of the year by exploring your national park and embracing the great outdoors.

Did you know: The definition of “solstice” comes from the Latin word sol meaning “sun” and sistere meaning “to stand,” “to appear,” “to stop,” or “to put.”

At times, it can seem like the park stays consistent and unwavering, like the sun in the sky during a summer solstice. But in fact, Cuyahoga Valley National Park is changing as quickly as the earth rotates through the sky. There are so many different ways to spend a day in CVNP. How will you enjoy it?