Throughout the animal kingdom, we see baby animals parting from their parents and finding their own place in the world. For baby owls in CVNP, it’s time for them to —quite literally —leave the nest.

While January is the height of nesting season for owls in the Cuyahoga Valley, we see baby owls, called owlets, spread their wings and venture for themselves in spring.

After hatching, owlets will stay in the nest for about six weeks, give or take depending on the species. When they are about six to eight weeks old, they set out to leave the nest —even without knowing how to fly. This provides an opportunity for the owlets to develop their leg muscles that they will soon need to catch their own prey.

If you see an owlet in a natural environment that appears to have fallen out of its nest, they have actually fledged. Bushes and smaller trees provide a means for the owlet to reach a higher perch until they can fly.

In CVNP, keep an eye open for Eastern Screech Owls, Great Horned Owls, and Barred Owls and their young. Read on to learn about owlets and a few tips on where to spot them in the park. 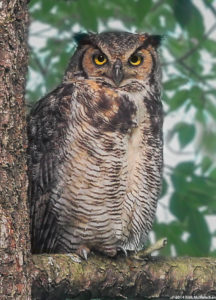 Great-horned owls are quite large, with two prominent feathered tufts on their head, like fluffy ears. They are generally a mottled gray-brown with reddish faces. Their call is a distinctive “hoo, hoo-oo, hoo, hoo.”

In January, Great Horned Owls start nesting and raise their families in the middle of winter. The eggs will hatch within one month, and six weeks after hatching, the owlets will leave their nest to walk around. It takes another three weeks for the owlets to learn how to fly, although the parents will continue to feed and care for their offspring for several months.

You can find these iconic owls in young wooded areas, especially near open fields. Look for them nesting along the trails surrounding Happy Days Lodge.

Note: stay clear from young owls and their nests, for Great Horned Owls are not afraid to attack if they feel their family is being threatened. 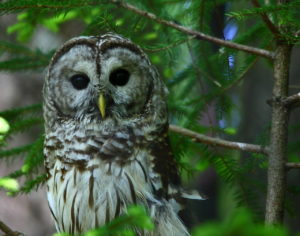 Barred owls are large and stocky with rounded ears and a mottled brown and white color pattern. Their song is an instantly recognizable “Who cooks for you? Who cooks for you-all?”

Barred owls don’t migrate, and they don’t usually move around very much. Many stay within the same few miles for their entire lives. The owl lays two to three white eggs which are incubated by the mother for about 28-33days. While the female is incubating the eggs, the male hunts and brings food back to the female. Four weeks later, the eggs hatch, and four to five weeks after that, the Barred owlets leave the nest. The age of the owlets at first flight is about six weeks.

Barred owls often nest within patches of evergreen trees. Look and listen for them along the Tree Farm and Oak Hill trails. 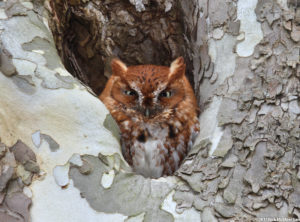 Eastern screech owls are short and stocky with large heads and almost no neck. Their most common songs are a soft, descending whinny and an even-pitched trill.

These tiny owls are more often seen than heard, being no bigger than a pint glass. Their two- to three-second trilling song is typically used by families and pairs to keep in touch, while the descending whinny is usually used for territory defense or courtship.

Eastern Screech Owls lay three to five eggs in March or April. The eggs hatch about four weeks after they are brooded by the female. It takes Easter Screech owlets eight to ten weeks after hatching to leave their nest.

Look for screech owls in woodlands near water, such as north of the Beaver Marsh near the beaver dam. They typically nest in large sycamore trees and like to capture warm sun rays from their nesting cavities on bright sunny days.

Happy exploring! Remember to always observe owls from a distance and be sure to stay at least 75 yards from an active nest.

Help improve the native habitat of owls and other animals in Cuyahoga Valley National Park by volunteering or becoming a sustaining, monthly donor.