Have you been lucky enough to spot a fox in Cuyahoga Valley National Park? Extremely secretive, super speedy, and exceedingly solitary, red and gray foxes are one of our national park’s more elusive mammals.

When you think of a fox, the red fox is likely the one that comes to mind. Red foxes have distinctive silky red fur and elongated bodies. Its undersides, throat area, and cheeks are white. The legs, feet, and outside of the ears are black. Its long, bushy tail, usually between 14 and 16 inches long, has black hairs mixed with red and ends in a white tip. 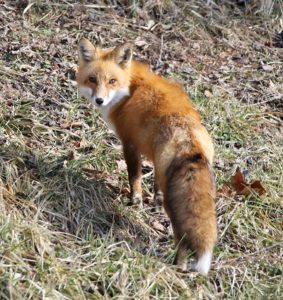 In contrast, a gray fox’s coat is a salt-and-pepper gray with a distinctive black stripe running from the base to the tip of his tail. Gray foxes also have another black stripe crossing their faces from nose to eye, orange ears and legs, and deep gray feet. Like the red fox, its cheek and throat area are white and this color extends on the gray fox to the lower jaw. There is a reddish patch on the side of its head below its ear. Its belly is white and a reddish band separates it from the gray sides. 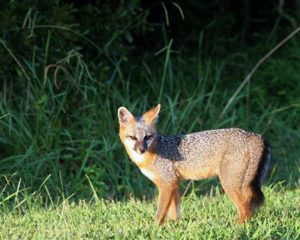 Photo: US Fish and Wildlife Service

You can most easily distinguish a gray fox from a coyote using its tail. Foxes have very bushy tails that are nearly as long as their bodies, whereas coyotes’ tails are shorter and less fluffy.

Get to Know CVNP’s Foxes

According to the Ohio Department of Natural Resources, the gray fox and the red fox are the two fox species found in Ohio, and two of four found in North America.

Foxes inhabit a variety of habitats in our national park, including grasslands and woodlands such as in the Wetmore and Oak Hill trail systems or near Indigo Lake. As the weather turns cooler, you’re more likely to spot these critters as they hunt for their food among the fallen leaves—or snow.

Pictured below: a fox spotted in the dark in Cuyahoga Valley National Park 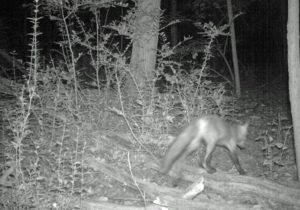 Foxes aren’t known to be picky eaters. They munch on insects, vegetables, fruits, and small mammals. And forget any fear of heights—gray foxes can climb trees thanks to sharp, semi-retractable claws. 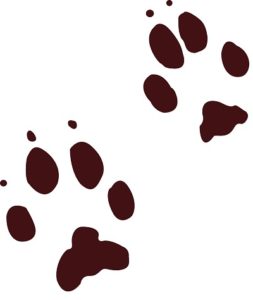 Our upcoming winter season is the fox’s most active time. If you happen to be on a trail snowshoeing or hiking, you may come across their tracks in the fallen snow. During the winter, foxes mark their territory and emit a musky smell similar to a skunk. They will also mate in the winter.

Unfortunately, foxes are becoming more and more uncommon in our national park. The intelligent, cunning, and ever-increasing coyote poses the largest predator threat to our red and gray fox population—but only if they can catch them.

Have you spotted a fox in the park? Show us! Post a photo using the hashtag #forcvnp and let us know which kind of fox you found and where.